If you have been wondering who makes Insignia TVs for Best Buy store, where Insignia TVs are made and whether or not the products any good, then you will find all the answers you are looking for in this guide. 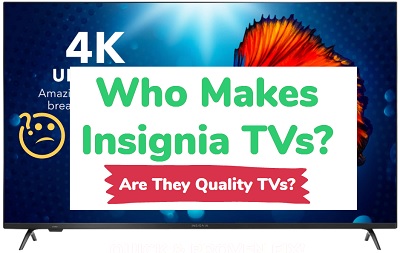 Big stores like to have house brand products and you can see that with Best Buy’s Insignia TVs, Walmart’s Onn TVs and many more. Usually, they have a pricing advantage in that these products are much more cheaper than similar products offered by bigger brands.

With these products usually offering the best value-for-money, you might begin to wonder as a consumer:

In this guide, I am going to explain and answer all these questions and many more.

Although Insignia TVs are owned, branded and sold almost exclusively by Best Buy, the TVs are actually manufactured by various contract manufacturers.

Like many private-label, in-house products, various components of Insignia TVs are sourced from brands like LG, Toshiba, Samsung, TCL and are assembled by contract manufacturing companies in China and Vietnam.

Although there are various claims of Insignia TVs (especially the Fire TV editions) being actually manufactured by big brands like Hisense, Samsung, LG, Sony and others, none of these are verified. The only thing that is certain is that these companies and more provide the various individual components used.

In-house products like these have been a common trend among big retail brands for years now, and you can also see something similar with Walmart’s Onn TVs. In 2018, Best Buy became the exclusive retail partner to sell Fire TV edition TVs made by Toshiba as well as Insignia TVs from the retail giant in a deal with Amazon.

Before we take a closer look at the manufacturers of some of the main components in Insignia TVs, let me quickly explain how these deals works.

I already mentioned that Insignia TVs are sold and branded by Best Buy, but are not in fact manufactured by them. Instead, Best Buy sources the components from various original electronics manufacturers (OEMs) and the components are assembled to make their own TVs.

For this to work, Best Buy makes a deal with these TV manufacturing brands. By giving the manufacturer a forward order for bulk volume of these parts, they get a much cheaper price. Also, they can change the manufacturing companies they use in these deals.

Best Buy also makes a deal with contract manufacturers that help to assemble these components and get a finished products – Insignia TV.

With the manufacturing cost advantage through these deals, Best Buy is able to offer consumers lower-priced products which the OEMs (original equipment manufacturers) may not have been able to provide. Also, they don’t have to compete in some ways since the products are usually sold exclusively at Best Buy store.

With many consumers also depending on their employees for recommendations and with their reputation in the retail business, they also don’t have to spend a lot on ads like other bigger brands which also means a good profit margin for them whilst providing relatively cheaper products.

A closer look at the components of Insignia’s new 32″ Fire TV model, the NS-32F201NA22 revealed some of the companies that manufactured and supplied them. Let’s take a look at some of them.

The model number on the LCD panel was labelled ST3151A07-1-XC-3, which from research showed that the the LCD panel was manufactured and supplied by a company called China Star Optoelectronics Technology (CSOT).

CSOT, also called Shenzhen Huaxing Photoelectric Technology is a China based display producer (owned by TCL, Century Science & Technology Investment and Samsung Display) that produces both LCDs and OLED displays, and started way back to 2012.

The Insignia Fire TV model has a main board labelled 0980-0900-1530(0A). Although, the specific model was not found, the part number does follow the same naming conventions as Samsung’s main boards (16 numbers with 1 number and letter in a bracket).

Hence, it is very possible that the main boards are manufactured and supplied by Samsung. A further look at the memory module supports this claim even further.

The model number on the memory module is K4B4G1646E, which is manufactured by Samsung as you can see here in their datasheet.

While this is true for this model, remember that these can change depending on the model which in turn depends on the contract manufacturer used by Best Buy during the manufacture year.

The Wi-Fi module was labelled model DHUR-AZ68, which from research is from Wistron NeWeb Corporation as you can find in this manual.

Moving on to the next question, where are Insignia TVs made?

Where Are Insignia TVs Made?

Although, Best Buy is a multinational electronics retailer that operates in the US, Canada, and Mexico, they do not manufacture any of the TVs themselves. The components used are manufactured and supplied by various manufacturers across various countries but the TVs are compiled in Asia, mostly China and Vietnam. 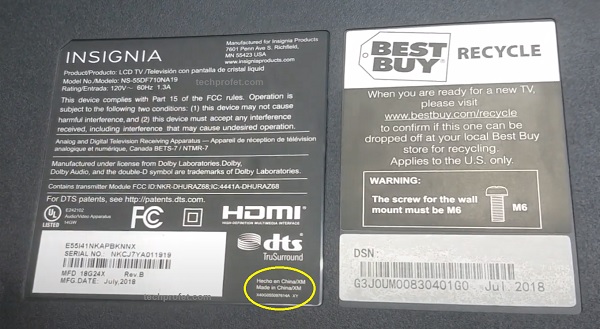 However, considering the nature of the whole manufacturing process, there is no specific known location for the manufacture of the TVs.

Are Insignia TVs Any Good?

Insignia TVs have good picture and while sound is not so great, it is good enough. For the price you get these for, they are still solid smart TVs. However, when compared to TVs from bigger brands like Samsung, LG, TCL, Hisense Sony, Vizio and the likes, they are quite not up to the mark.

Whether or not you will enjoy it comes down mostly to why you are buying the TV and what you are looking for. If you are looking to get a good TV for the best value, then Insignia is one of the ways to go especially the 4K UHD models using Fire TV.

They have a wide range of streaming apps available via the Fire TV OS including Amazon Prime Video, Hulu, Disney+, Netflix, YouTube and many more. Older Insignia TVs used to have the Roku OS. 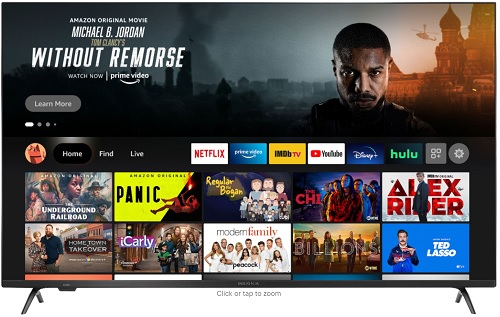 If you are looking for a TV to use as a gaming monitor, Insignia TVs are not the best option unless you are going for the more recent QLED panel editions (like the F50 series). Otherwise, the LED panel editions have fairly high latency and you won’t enjoy gaming on them.

Overall, the average review from verified buyers on Best Buy and Amazon is 4 out of 5 which is quite solid.

Currently, some of the best Insignia TVs to buy include the Insignia F50 series in 50″, 55″, 65″ and 75″ which are built on QLED panel and hence brighter than the stand LED panel in some other Insignia TVs. 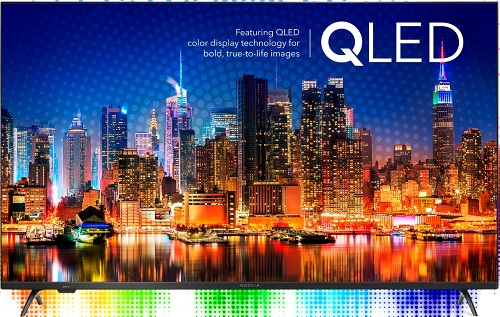 They have solid color range, Dolby Vision HDR, DTS:X immersive audio which provides a more quality sound than the older models, as well as the standard HLG and HDR10 response time (lag).

How Long Do Insignia TV Last?

Insignia TVs can last up to 7 years or more. However, there have also been cases of users reporting that they had issues and the TV became unusable after 3 years or less. The latter is something that can happen on all other TV brands as well, although maybe less common in bigger brand TVs.

In most cases, the backlights are usually the first to burn on and become faulty under heavy usage. When this happens, the picture on the TV goes off and all you see is a black screen.

If this happens during the warranty period (a year from the time of purchase), you can simply get it fixed at no extra cost. Otherwise, you could either pay to get the backlight (or any other issue) fixed or may have to purchase a new one.

That said, if you’re concerned about your television breaking too soon, then you should consider getting an extended warranty since they only provide a 1-year warranty.

The point is, there is no definite answer to the question of how duration Insignia TVs are. The product is good, the quality of the materials used is solid and while some users have enjoyed their set for a very long time after purchase, others have had it otherwise.

Are Insignia TVs made by Samsung?

Although some of the models have a similar model number pattern as Samsung, Insignia TVs are not actually manufactured by Samsung. Samsung has been one of the companies that supplies TV components to Best Buy which are them assembled to build Insignia TVs. Other companies include LG, TCL, Hisense and Toshiba.

Are Insignia TVs Made In China?

Insignia TVs are made mostly in China. Some models have also been seen to be made in Vietnam as well.

While Best Buy owns the Insignia TV brand, they do not actually manufacture the TVs. Instead, they make deals with contract manufacturers who assemble the TV components that are gotten from other brands like Samsung, LG, TCL and Toshiba.

Have you had any experience with Insignia TVs or are you looking to get one? Let me know what you think in the comment section below.