If your Hisense Roku TV won’t turn on, then you are on the right page. When this happens, you may also see a red blinking light while there’s just a black screen. In some other cases, you may see a flickering black screen or not. 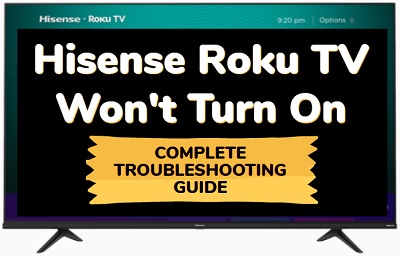 In this guide, I am going to show you how to quickly fix an Hisense Roku TV that is not turning on and other related issues that come with it.

To fix an Hisense Roku TV that won’t turn on, unplug the TV directly from the power outlet to turn it off. Then, wait for 60 seconds and plug it back in. Finally, turn it on using the remote or the power button on the TV and it should start working.

However, this is just one out of the many ways to fix the issue. Let’s take a look at every possible fix for this issue, one after the other.

Power cycling your TV (also known as a soft reset) is the quickest and one of the most common ways to fix an Hisense Roku TV that won’t turn on. If you also see a flickering black screen on your Hisense Roku TV, this is also effective in fixing it too.

That said, here’s how to do power cycle your Hisense Roku TV:

Now, the TV should turn on and you are good to go! Otherwise, move to the next fix.

Like I said earlier, a simple software glitch or corrupt cache files on an Hisense Roku TV that cause it not to turn on or be stuck in standby mode with a blinking red light. When that happens, clearing the cache files is a very common way to fix it.

To do this, you need to press a combination of keys on your Hisense Roku TV remote controller while the TV is on with a black screen. As long as the TV is plugged in and you can see the red light, then this combination will work and fix the issue.

That said, here’s how to do clear your Roku TV cache:

Make sure you press the keys in sequence for the process to work.

Wait for a few seconds and your TV should restart and turn on without any black screen. Now, you should be seeing pictures on your Hisense Roku TV. Otherwise, try it a few more times (up to 3 times). I’ve seen users who reported that they had to try the process a number of times before the issue got fixed.

If it fixed the issue for you and your Hisense Roku TV is now on after the first try or a couple of tries, great! Otherwise, let’s continue to the next step.

A faulty power outlet is another reason why you may be seeing a black screen on your Hisense Roku TV. The power outlet may be completely faulty and just not delivering enough power to your Roku TV.

However, if you can see a blinking red light on your Hisense Roku TV, this most likely doesn’t apply to you. In that case, you may skip to the next fix.

It is one thing to have a working functional outlet, it is another thing for the power cable to actually be working.

If you have another power cable, you can switch it to your Roku TV and try to turn it on.

If that fixes the issue, then the power cable is responsible for the black screen on your Hisense Roku TV.

4. Replace Batteries in Remote & Reset It

If you have been using the batteries for quite some time, they are probably weak. In that case, when your Hisense Roku TV is plugged in, it will stay in standby mode and won’t actually turn on when you press the power button on the remote. 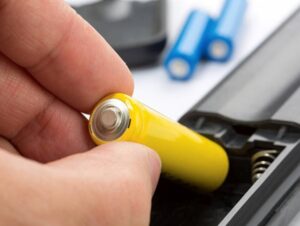 In that case, you can try using the power button on your TV instead or just simply change the batteries in the remote controller.

While the batteries are being changed, you also need to reset the remote controller.

Here’s how to reset your Hisense Roku TV remote:

NOTE: One or more of the keys on your remote may also be stuck. Hence, before you put the batteries back in the steps highlighted above, you can press every button on your remote controller a few times to make any stuck keys set back to their normal place.

With that, your Hisense Roku TV should turn on and start working.

If that fixes your issue and your TV turns on, good. If it doesn’t, no problem at all. The hard reset which I am about to show you should fix it.

If your Hisense Roku TV still won’t turn on, then you need to perform a hard/factory reset. Since you can’t access the settings with the remote controller, the only way to do this is by using the physical reset button on the Hisense Roku TV.

Here’s how to reset your Hisense Roku TV without a remote controller:

Now, your Roku device will restart like a brand new one. Go ahead with the activation and configuration. Once done, the black screen issue should be fixed.

Your Hisense Roku TV could be on, but if the backlight is defective, you will not see any picture at all on the screen. You will basically just have a black screen on your TV even if the red light is blinking.

In order words, your Hisense Roku TV is on, but the backlight needed to show images is faulty.

The backlight can be fixed by replacing the led strips on the screen. It’s a quite a tricky process, but you can get the job done with a good tutorial.

The video below will show you a step-by-step procedure of the whole process from start to finish, and is also very easy to follow:

The last thing on the list is to contact Hisense Roku support team to help you fix the issue. If you still have warranty, then you should be able to get it fixed at no cost to you.

If you found this guide helpful, kindly drop a comment below. Also, let me know which of these methods fixed the issue for you.