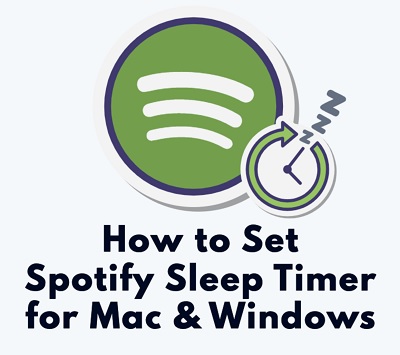 Spotify sleep timer is a feature that allows you to set a time for your Spotify app to stop playing songs or podcasts automatically.

Personally, I use the feature when I’m about to sleep at night so that my night playlist stops playing automatically about an hour after I close my eyes to sleep. That way, my device doesn’t play songs all night long when I’m already deep asleep while wasting away the battery life.

Most times, I use the night timer feature on my mobile phone, until one day I wanted to play my sleep playlist on my Macbook instead (because it has a better speaker). So, I opened the app and looked around for the Spotify sleep timer on my Macbook Pro, but I couldn’t find it.

After trying a few things and searching online only to find everywhere (including on Spotify community forum) that the feature is not yet on desktop (Mac or Windows), I finally found a workout on my own!

The best part? It’s as easy as anything!

So, if that sounds like what you are looking for, let’s begin right away.

To use Spotify sleep timer on your Mac or Windows computer, login to your Spotify account on both mobile and desktop devices to synchronize them. Once the song is playing on your PC, set the sleep timer on your mobile phone and it will also work for your desktop.

With the Spotify sync feature, you can play music from your mobile phone and choose for the sound to be coming out from your laptop instead and vice versa. As a result, when you set a sleep timer on your phone, it works for your desktop as well.

That is, your phone can serve as a “remote controller” for your desktop.

Now, I will show you how to go about it.

How to Set Spotify Sleep Timer on Macbook

It doesn’t matter whether you are using an Android or iOS phone, the procedure is similar.

First, you need to  make sure both devices are connected:

Now, you can go ahead and set the Spotify sleep timer from your mobile phone by following the procedures below:

That’s it, you have successfully set a Spotify sleep timer for your Mac using your mobile phone.

How to Use Spotify Sleep Timer on Windows

The alternative method will be to use Bluestacks to load the Spotify Android app on your Windows computer.

Again, the procedures are similar.

First, you need to  make sure your mobile phone is connected to your Windows computer.

NOTE: Make sure your Spotify account in open on your Windows and also connect to the internet

Now, you can go ahead and set the Spotify sleep timer from your mobile phone and it will synchronize and work on your desktop/laptop as well.

That is it, you have successfully set a sleep timer for your Windows computer.

This alternative method only works for Windows (unless you have partitioned your Mac to have a Windows boot part too).

The down side? It requires you to download another software. Personally, I don’t like this method for a very obvious reason.

Bluestacks is an app for Windows that allow you to run Android apps from your Windows app.

So, all you need is to download Bluestacks on your Windows app, configure it and run it.

Once you’ve done that, install the Spotify android app on your Windows computer.

Since the Spotify sleep timer feature is directly available on the android mobile app, you can use it from there.

But, why go through that stress if there’s a convenient method already (explained above)?

Users have been requesting for the Spotify sleep timer feature to be available on Spotify dating back to 2020.

Currently, it has been tagged by Spotify team as a ‘live idea‘ which means it’s in progress, but hasn’t been implemented yet. 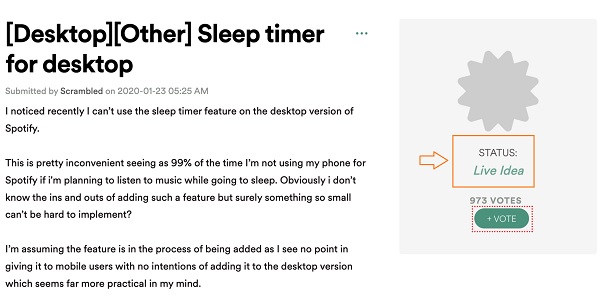 That said, I expect that the feature is released sooner than later.

However, there is no official date for the release of the feature on desktop devices yet.

The last update as regards the feature was made by Spotify team back in June 2021, the message was:

Thanks for bringing us your feedback in the Spotify Idea Exchange.

Your suggestion has gathered the votes necessary and your feedback is now reaching the internal teams at Spotify. They’re aware of the vote count and popularity of this idea. We’ll continue to monitor and check out the comments here, too.

As soon as we have any updates on its status, we’ll let you know.

A similar request for made for the feature to be available on all mobile devices when some users didn’t have it on their iOS devices. That request, has been granted obviously.

Even a more popular request that has been made by thousands of users is the feature that allows you to see people that liked/followed your Spotify playlist, and not just the total number of likes as we currently have on the platform. This, we are yet to see though.

You can set Spotify sleep timer on your Mac or Windows by synchronizing your computer to your mobile phone and using your phone to set it.

For now, there is no official date as to when the feature will be directly available on desktop like it is on Android and iOS devices.

That said, I hope you find this helpful. If so, your feedbacks will be much appreciated in the comment section. Also, kindly share with others so that can benefit from it too. 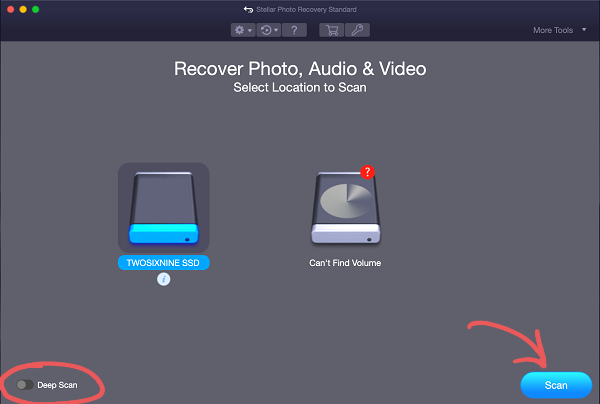 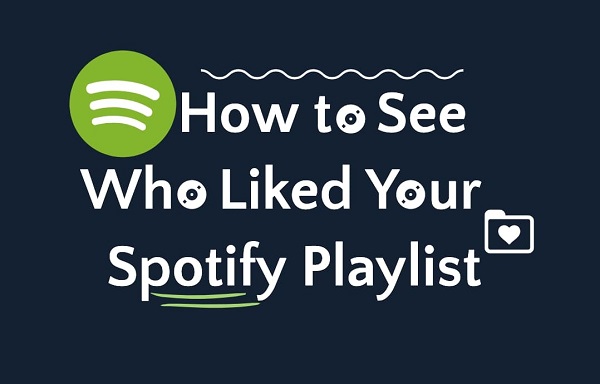 How to See Who Liked Your Spotify Playlist (QUICKLY!) in 2022