If the left or right JoyCon, or even both JoyCons for your Nintendo switch are completely dead and not charging, then you are not alone. 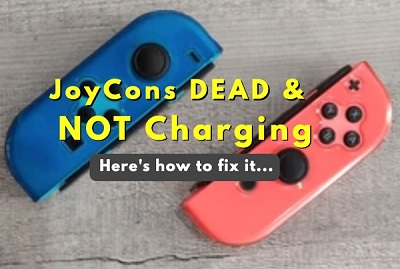 It’s one thing for your JoyCon to not be charging at all when they are low, it’s a whole other thing if the JoyCons are completely dead already.

I understand the loop you are stuck in, but you have no reason to worry anymore.

In this guide, I am going to show you at least 3 ways to fix your right and left JoyCons that are completely dead and not charging.

If that sounds interesting to you, let’s dive right in!

JoyCon Completely Dead and Not Charging

Like I said earlier, there’s a way to fix that – 4 ways actually.

No matter what, at least one of these methods will get it fixed.

First of all, make sure the JoyCon and connecting rail properly have been cleaned as explained and shown in this video:

Whether or not cleaning the JoyCons fixes your issue, it’s best to cross it off the list. Moreover, it’s the easiest & fastest thing to do (and also with very high rate of getting the issue fixed!).

You don’t want to go through the whole process below and conclude that it’s not charging when the only issue left is just the dirt/dust stuck in the connecting sides.

That said, let’s begin with the first method.

If one or both of your JoyCons are completely dead and not charging, first confirm that the Nintendo switch still charges by testing it with another JoyCon that’s working and not dead. Once you confirm that it works, plug in the JoyCons into your Nintendo switch for 4 hours.

Now, this method will work if neither the switch nor the JoyCons is faulty.

What you need to do is simple:

First, you need to be sure that the Nintendo switch connecting rail works.

One way to do that is to find a working JoyCon that’s not completely dead (probably from a friend) and see if your Nintendo switch charges it.

Some users who had the same issue where able to fix it (and got a fully charged JoyCon) after leaving it plugged into their Nintendo switch for hours.

Just literally forget about it while plugged in, and be patient.

If you have done this for hours and it still doesn’t fix it or you just don’t want to wait for that yet, then it’s about time you open up your switch which takes us to the second method.

Now, don’t get scared because it requires you to open up the switch.

It’s not a technical thing to do at all. You will just be loosing some screws and putting them back in (at least that’s the simplified version).

By the way, I have also attached a video below the explanation for visual demonstration.

Now, let me explain what we are trying to achieve here.

There is a circuit in the board of the switch that houses both the fan and the JoyCons connectors. If there is a short in this circuit, it causes the JoyCon not to charge. This short in the circuit is a common issue.

What we want to do here is the fix the short in the circuit so that power reaches the JoyCon connector and it charges when you plug it in.

(i) Open up the Nintendo Switch

There is nothing much to explain here. Get a screw driver, loosen the screws and open up the case so you can see the board.

When dealing with technical fixes, it’s best to disconnect the battery most of the times.

The way you can do this is the unplug the battery connector. 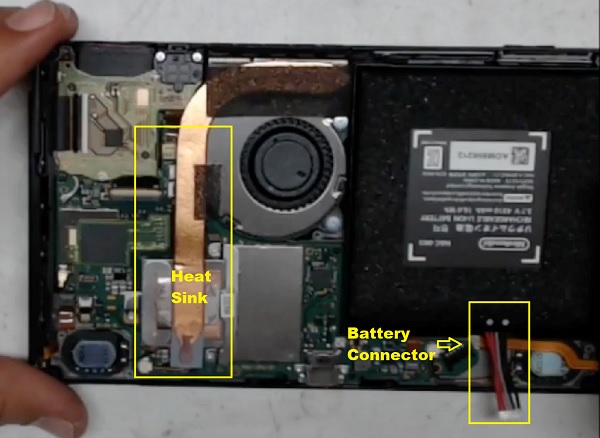 Remember the fan connector we talked about earlier? It’s just below the hear sink (also shown the screenshot above).

Therefore, to access the fan connector, we need to remove the heat sink.

To do that, loosen the screws holding it in place and carefully lift it up to see the circuit we need to work on.

NOTE: Be careful not to pull hard on it while trying to remove it as it’s quite fragile.

Now, this is the main thing we are trying to fix.

The diode is the one causing the short in the circuit, making the JoyCon not to charge.

The diode isn’t a necessity, and the game will run perfectly well without it.

In fact, in a new revision of the same Nintendo switch board, the diode was not even included at all.

If you don’t know what the diode looks like, go ahead and watch the video below that shows the whole process.

Not quite technical to do, is it?

(v) Put back everything in place and assemble

Before you assemble it back, make sure you: 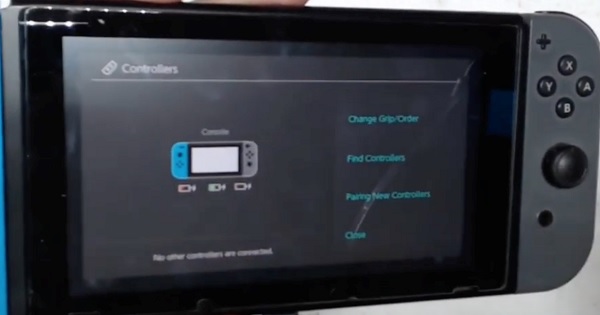 Turn it on, connect the JoyCon and it should be charging perfectly well.

3. Buy a Charging Dork for JoyCons

if the switch isn’t charging at all, you last option is to buy a charging dork for your JoyCons.

At least, this is cheaper than getting a whole new Nintendo switch.

If you are within warranty period for your Nintendo switch, then you can contact Nintendo to get a replacement or fix the issue for you at no extra cost.

Therefore, if your left or right JoyCon is completely dead and won’t charge, there are 4 ways to fix it:

That is all for now.